Faunus was the horned god of the forest, plains and fields; when he made cattle fertile he was called Inuus. He came to be equated in literature with the Greek god Pan. Faunus was one of the oldest Roman deities, known as the di indigetes. The first of the two festivals to Faunus happens on the 13th with the second once taking place on December 5th. Faunus was worshipped across the Roman Empire for many centuries. Faunus was also worshipped in Gaul and is considered to be equivalent to the Celtic deity Dusios.

On the festival of Faunus today you can set a bowl of soil, gathered earlier in the year, and many small cups of soil, the figure of a goat, a plate of cookies shaped like goats, and a cup of wine, on an altar of green cloth. In the large bowl set many sticks of incense, with a single stick in each cup. His element is Earth and on this day you can give gifts of seeds to people who farm or grow produce around their home. Also a vegetarian meal is eaten on this day. Below is the invocation to Faunus:

You whose name means Favored One,

Favor us, as we stand here today!

Favor our fields, that they may yield.

Favor our gardens, that they may grow.

Favor our flocks, that they may increase.

Favor our faith, that it may grow as well.

Give us increase and abundance of all good things,

Enough to help us through times of dearth.

Give us luck, that we may find our way

Past all the obstacles that cannot be

Smile on us, Faunus, Gladsome One,

Let those in our care not go hungry

Nor suffer the pangs of thirst.

Show us the future, Oracular One,

And we pray that it may be a future

We can all look forward to.

Son and wife of Marica the nymph,

Called Lupercus, He who wards off the Wolf,

Ward the evil from our lives

And watch over us as your flock.

The wine is poured out as a libation. One takes the great bowl of earth and purifies the altar room with its smoke. All others take a cup and walk alone to some place in the House or the lands in order to purify that place with the smoke. 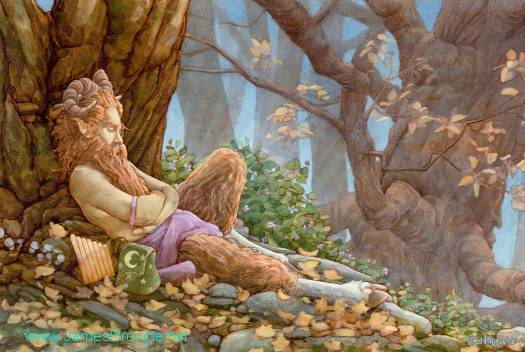