Festivals of the Dead from around the World

Festivals of the Dead from around the World 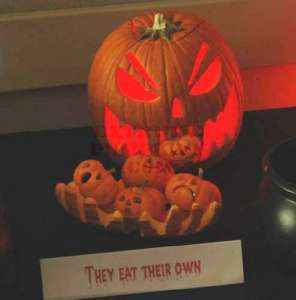 Halloween is my FAVORITE time of the year. I like to learn different things about the history and others traditions. I found this on a teaching site, actually, and thought it was interesting.Not Just Halloween: Festivals of the Dead from around the World“The dominant spirit, however, that haunts this enchanted region, and seems to be commander-in-chief of all the powers of the air, is the apparition of a figure on horseback without a head. It is said by some to be the ghost of a Hessian trooper, whose head had been carried away by a cannon-ball, in some nameless battle during the revolutionary war; and who is ever and anon seen by the country folk hurrying along in the gloom of night, as if on the wings of the wind.”—“The Legend of Sleepy Hollow,” Washington IrvingEurope and America are by no means the only places with long histories of acknowledging the close of the harvest season through the remembrance of ancestors and strangers who have passed on. These traditions also share many elements with festivals held around the world commemorating the death of spring, as well as loved ones no longer with us. One point of intersection can be found in the offerings of food that were left on doorsteps on All-hallows-eve in many parts of Europe and America in the hopes that it might prevent wandering spirits from entering the house. Offerings comprise an integral part of many fall festivals to the dead around the world, such as those celebrated and practiced in Japan, Cambodia, and Mexico.

Why might the making and offering of special foods be an important part of festivals dedicated to the dead?

Japan—The Obon, or the Festival of the LanternsThe Festival of the Dead in Japan, which is called Obon, is held every year in the month of August. The festival often goes by a second name: The Festival of Lanterns. As in the traditional festival of Halloween, the souls of the departed return to the world of the living during this time. However, unlike Halloween, in which the souls of the dead are often imagined as malevolent or angry, like the Headless Horseman, Obon is a day when the spirits return to visit their relatives.Many Buddhists in Japan celebrate this holiday by preparing offerings of special food for their ancestors’ spirits, which are placed on altars in temples and in their homes. As the sun goes down families light paper lanterns and hang them in front of their houses to help the spirits find their way home. The celebrations end with families sending colorful paper lanterns lit by candles floating down the rivers and bays of Japan and out to sea. The string of colorful lights bobbing in the water are meant to guide the spirits of their loved ones back to the realm of the dead until next year.

Cambodia—The P’chum Ben at the PagodaIn the tenth month of the lunar calendar, which usually falls in September, Cambodian Buddhists celebrate the Pak Ben, 14 days during which they will wake before dawn each morning to prepare offerings of food and other gifts to the monks living in the local pagoda and to their ancestors. On the 15th day villagers visit the pagoda with offerings of sweet sticky rice and bean treats wrapped in banana leaves and other special foods to mark the P’chum Ben, or the Festival of the Dead, which marks the close of the Pak Ben.Each morning during the festival offerings of food, often beautifully prepared and decorated, are brought to the many temples and pagodas that dot the Cambodian countryside and cityscapes. These offerings are meant for their relatives who have passed on, and each plate of decorated sweets and fruits are offered with a prayer that they will reach their loved ones. In addition, huge batches of rice mixed with sesame seed are prepared each morning and spread along the ground in front of the pagoda where it is left for the hungry ghosts, as spirits who wander the world without any living ancestors to take care of their memory are known.The P’chum Ben festival is a day when people wear their finest clothes, get together with family and friends at the local pagoda, listen to music and speeches by monks, abbots and other important local figures, and enjoy the culinary delicacies whipped up for the occasion. While this Buddhist festival has important and serious underpinnings, it is also a time for people to spend a day visiting their friends and families, and enjoying the celebrations.

The Aztecs’ Festival of the Dead was not a day-long or week-long celebration, but went on for nearly two months in which the fall harvest was celebrated and death was honored. The festival was presided over by the goddess known as Mictecacihuatl, or the Lady of the Dead. Over the course of the festivities participants would create offerings for the dead such as foods, alcohol, flowers and ceramics.Aztecs and Mayans both believed that one day of the year the souls of the departed would return to the realm of the living, where they could visit their families and loved ones. With the arrival of the Spanish, and Catholicism, the new rulers of Mexico attempted to marshal the fiestas dedicated to the dead under the auspices of All Saints Day (November 1st) and All Souls Day (November 2nd). The dates of these two Catholic holidays are now celebrated in Mexico as Los Dias de los Muertos.This fiesta is marked by the invitation by the living to the dead to return to their family home for a visit. Families place photographs of their loved ones who have passed on at the deceased’s gravesite or on a family altar. They also place offerings of flowers, drinks and food alongside the photographs. This ritual is particularly important for those who have been lost in the year since the previous festival, and is a way of coming to terms with the death of someone loved and missed.Extended families will often meet in the cemeteries on the evening of the festival, and will collect together at the gravesite of a recently deceased relative. The family may keep vigil through the night, all the time eating the foods they have made in preparation for the fiesta, visiting with their relatives, and praying for all the members of the family, alive and dead.The preparation of the altar is an integral part of this fiesta, and some of the objects that are prepared especially for the altar have become a familiar sight to many outside of Mexico. Altars are often decorated with flowers, whose brief life span is meant to be a reminder of the brevity of all life. Brightly colored and intricately cut tissue paper festoon the altar, waving like multi-colored flags. Sweets, fruits and other foods are joined by the staples: bread, salt and water. Grooming supplies, such as a washbasin and soap, are provided for the spirits to tidy themselves after their long journey. Finally, the well-known Calaveras statues depicting skeletons participating in the activities of the living- from cooking to playing in mariachi bands- take their place on the altar, where their comic appearance brings a smile to the faces of the grieving.I would love to hear what you do on Samhain/Halloween. What special traditions do you and your family have? It is a very special time of the year in our home, so I would love to hear how others celebrate!

Wonderful April I love this post come on people add to it...

Here is Italy Ossa dei Morti Or, Bones of the Dead November 2 I was taught the evil catholic church kinda took are pagan holiday and shoved it on November 2, because they honor the saints on November 1st, and they kinda wanted to bring the Pagans into the fold, but in my family it is all about food and offerings, and remembering those who dearly parted, as children we were told that are dearly parted relatives and spirits who we held dear would give us little gifts and candy... Ole time stories was told and giving of thanks for what they brought to our lives from joy and happiness and the like. The dearly departed at my Aunties house got a seat at the dinner table, got a plate of food and drink...Brightest of Blessing Je'Amour