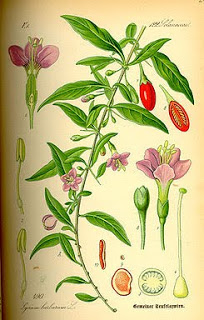 Lycium chinese and barbarum (often traded interchangeably in Chinese Medicine) Chinese Matrimony-vine, Boxberry, Boxthorn, Wolfberry, and Gou qi-zi. PLEASE NOTE! "Goji berry" and Lycii berry are virtually the same, with the only discernable difference is that Gojii is usually a high altitude strain of Lycium and is commonly found in the Himalayas, Nepal, Tibet, etc., whereas Lycii berry is the more common variety found in lowland areas. For trade purposes they are usually considered the same.

Lycii berry, otherwise known to Chinese herbalists as Goji or Chinese Wolfberry is a bright red, almost chewy berry with a taste very similar to Raisins. It has been used as a general nutrient tonic (Yin tonic) for many years and Chinese medicine refers to it as a "cooling tonic".

Whole berries can be eaten raw, as they have a pleasant taste. Or they can be included in food or prepared as a tea.

Not much research has been carried out for this particular botanical and to date there have not been any released notes on possible medicinal contraindications, side effects or potential health hazards (except for those pregnant or nursing). One particular warning that has been issued comes from many traditional Chinese herbalists who suggest that Lycii should never be taken for acute colds or flu, because it will have the tendency to bring a sickness deeper.

It was once said by one of our favorite published herbalists that "Wolfberry can make the young wolf out of the old man", because for many years Lycii has been administered for erection problems.

In one recent study, results showed that men over 59 who took 2 ounces of Lycii berry each day walked away from a 10 day study having significantly higher levels of testosterone. In addition to its seemingly successful use of erection problems, Lycii is also widely used as a general health tonic, capable of removing harmful toxins from the body.

The fruit is one of the most popular tonics used in Chinese herbal medicine today and a decoction is typically used to clear the vision, strengthen the kidneys, and nourish the liver.

Lycii berries contains betaine, which is an emmenagogue and abortifacient. Avoid using when pregnant or nursing. Chinese herbalists suggest to abstain using it during times of cold and flu.

For educational purposes only This information has not been evaluated by the Food and Drug Administration.

This information is not intended to diagnose, treat, cure, or prevent any disease.